The topic of real estate and social media appeared on the pages of The Wall Street Journal Sunday, and the business-to-business article pointed to commercial brokerages leading the way in terms of Twitter followers. 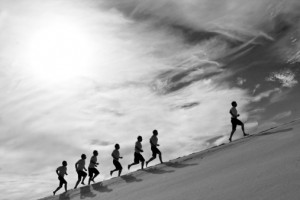 My attention, however, was on a well-written piece that draws attention to endless conversations surrounding whether the development of an online social presence is better for bolstering brand awareness or generating leads.

I’ll save you the suspense. Social media drives neither. You do.

Like it or not, our social media presence is an online extension of real-world brands. And whether or not you see value in building visibility or starting conversations via sites such as Twitter, you’re absolutely correct.

On one hand we have William Marks, a JMP Securities analyst who offered this nugget of inspiration to brokers fond of growing their books of business.

“I don't think there's any direct way to turn social media into a deal,” he told the Journal. “There are indirect benefits, yes, because it's free advertising in a sense. But there is a ceiling to how much it can actually benefit.”

I added italics to highlight what I believe is flawed thinking in the minds of pros such as William Marks, and I wonder if their idea of social networking in offline settings starts with counting business cards or measuring ROI based on the number of contacts saved in their smartphones.

Because we all know the fastest way into a prospective client’s heart and wallet starts with “free” advertising of the fact that we’re looking for quantifiable relationships that “actually benefit” us instead of the prospect, right?

Wrong. That approach is nearly as silly as a major big-box retailer choosing a real estate firm to work on a multimillion dollar deal simply because the latter has a few thousand followers on some social network. I’m not saying follower count isn’t important. But obsessing over the number, especially when starting a real estate social media campaign in an industry known for taking its time with embracing new technologies, intrigues me far less than setting out to interact with and inform target audiences while looking for the long-term benefits of embracing modern communications platforms and Internet-inspired customer service tools.

Shouldn't the focus be on what you bring to the table? Your capabilities. What you can deliver. And credible data to back that up? What if a qualified, not quantified, buyer, seller or tenant stumbles on your brand in the social media space? Why should they even care?

Is New York-based Studley, for example, less successful than Jones Lang LaSalle because the former has only 500 Twitter followers compared with 16,000? I think not. Heck, my neighbor has a much larger following than Studley, and isn’t nearly as self-promotional.

And guess what? When that kid graduates from college, starts or joins a successful company, and is ultimately empowered to scope out new retail, office or industrial space in your territory, how important then will it be for him to find on Twitter or LinkedIn well-polished digital brand standards and content streams that reflect your unique value propositions?

If one of your goals in the coming year is to attract a larger following, that's great and I'm with you. Yet the business plan we need to get there should focus on reinforcing our digital brand standards, and having something relavent to share when those coveted followers appear.

Unless, of course, you really think of Twitter or LinkedIn as nothing more than advertising vehicles with limited potential to convert prospects into paying customers?  If so, then perhaps you should ignore the social media space until your closest competitor masters the art of digital communication. Then start playing catch up.

One broker quoted by the Journal said five to 10 of 25 meetings he’s set up via LinkedIn connected him directly to new business opportunities. Another said social media helped him kick cold calling. Yet another said he had 1,700 followers on his individual Twitter account, which he started following a consultation by an intern!

These apparent successes aren't all that surprising, however, given that smart real estate salespeople understand importance of integrated marketing strategies that cross a multitude of print and online platforms. In terms of real estate leads and warm referrals, I’ve personally witnessed one social media icon in an email signature help a broker client beat out two of its largest competitors, and ultimately close a commission-based real estate sale that likely more than covered my fees for an entire year.

With nearly every marketing agency scrambling to measure and prove with cold and fast numbers the value of social campaigns - and business reporters continuing to write about numbers of followers instead of the quantity of added value - allow me to sum up the bottom line of social by way of a quote attributed to pioneering automaker Henry Ford: